You may have heard the old joke about a couple in their 90s filing for divorce. When the judge asks them, "Why did you wait so long?" they respond, "We wanted to wait until the kids were dead."

In fact the only time divorce is not going to hurt your children is when they are dead. There's a myth that adult children can handle their parents' divorce and aren't hurt by it. In fact, adult children may very well be devastated by their parents divorce. They not only have to deal with the pain of their divorce, but the assumption that it shouldn't bother them. Grownups are supposed to be just that--grown up--not dependent on their families. But, especially today, young people depend on their families throughout their young adulthood, for money, advice, a place they can call home, basically a net they can fall into when life knocks them off the tightrope.

Robert Frost once said, "Home is the place where, when you have to go there, they have to take you in." He expressed perfectly how much we depend on having a home when we go off into the world on our own. Just knowing it's there is profoundly reassuring, even if we don't come back home. Divorce means that home where they have to take you in is gone. After a divorce, everything you have taken for granted about your life isn't true anymore. You have to adjust your notion of your childhood to fit the new reality.

Adult children suffer a series of intense losses as a result of parental divorce. They lose their family as it has been and will never be again. While growing up children have a picture of their futures which their mother and father are part of. They will come to their weddings, be there for graduations, holidays, family visits. Divorce shatters all those expectations; any holiday or celebration becomes fraught with anxiety over which parent will come, will they bring the new mate, how will divorced parents get along, should they be separated, seated together, who should give the toast at the dinner etc?

The bedrock sense of self that children depend on to know who they are can be shaken by their parents divorce. Adult children will re-evaluate their childhoods in the light of the divorce, and come up with different versions of who they were and who they are now. They often start questioning the point of marriage and become more leery of dating and making a commitment.

The losses go on and on, separating what was once one extended family. Families split apart, take sides; children may stop seeing in laws if they take sides, or even if they don't. The logistics alone can be daunting, especially if everyone lives in different parts of the country. Mother and father are no longer one unit, no longer mom-and-dad. They have to deal with two of everything, two phone calls to keep in touch, two homes, two stepfamilies, dividing their time, trying not to make anyone jealous. Instead of being a source of comfort, parents become a source of anxiety.

Roles are reversed when there are adult children. Parents stop acting like parents and expect their kids to take care of them. Divorced parents may start telling their troubles to their children, or rely on them too much.

Adult children often get caught in the middle of a nasty divorce, with each side vying for their approval. This can be intensely painful for people who are used to relying on their parents as the bedrock of their lives. "Divorce means watching the two people we love most turn against each other and sometimes try to destroy each other--and because we are adults we are privy to every excruciating detail....They push us to take sides, manipulating us with angry phone calls and emotional e-mails. Instead of sitting down and explaining what's happening, they suck us into the middle," says Brooke Foster, author of The Way They Were; Dealing With Your Parents Divorce After a Lifetime of Marriage.

Adult children may even feel like they've lost their pasts. If they thought they had a happy childhood, they have to think again--to start examining whether or not it was really happy or they were deluded. The family history comes into question. They may even feel their parents stuck it out for them, which really can be hard to take--that makes them the cause of their parents unhappiness all those years. Foster says, "Adult children say they lost their sense of belonging. Divorce shattered their family and their concept of home. Something inside them died."

The fallout from divorce keeps reverberating over the years, with every new family event, every graduation, wedding, birth, funeral. Even caretaking a parent in their later years falls on the children, not the spouse. The notion that divorce is easy once the kids are grown is a myth. Divorce is never easy and the kids are never grown. 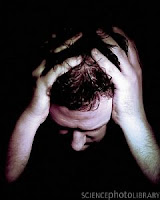 Fewer than half of Americans with bipolar disorder are properly diagnosed and treated, recent research shows. Could you spot bipolar symptoms – in yourself or in someone close to you?

Bipolar disorder has been all over the headlines recently, from Charlie Sheen’s highly publicized rants leading many to suspect that the star is exhibiting “mania” (a telltale sign of bipolar disorder's emotional highs) to Catherine Zeta Jones seeking treatment for bipolar II, a milder form of the disorder. But the mental health condition goes far beyond Hollywood — and according to recent research, many people with the condition don’t even know they have it.

Fewer than half of people in the United States who show classic signs of bipolar disorder actually get diagnosed and treated, says a recent Archives of General Psychiatry report on a survey of more than 61,000 adults in 11 countries — the United States, Mexico, China, Japan, Brazil, Colombia, India, Lebanon, Bulgaria, Romania, and New Zealand. Bipolar patients in lower-income nations get even less treatment — in some cases, as few as 25 percent receive help.

It may be buzz-worthy these days, but many people don’t fully understand bipolar disorder and the symptoms that can lead to proper diagnosis and treatment. Bipolar, also sometimes called manic-depressive disorder, is characterized by shifts from extreme highs (known as mania) to emotional lows (depression), with “normal” moods in between.

It’s bipolar disorder’s manic phase that most sets it apart from other common mental health issues, such as depression and anxiety. While many people associate mania with high energy and exaggeratedly good moods, these other key symptoms are more subtle:

Reckless spending: If a friend is blowing her paycheck on shopping sprees she can’t afford, watch out. A person in a manic phase of bipolar disorder is more likely to take big risks, including spending splurges that can lead to mountains of unmanageable debt.

Super-charged sex drive: A sudden revving up of a person's sex drive, obsessively thinking or talking about sex, or engaging in sexual encounters he otherwise wouldn’t (like a one-night stand or sex with someone he doesn't know well) are all symptoms of hypersexuality, another less-obvious mania clue.

Alcohol or drug abuse. These often go hand-in-hand with manic episodes: As many as 60 percent of people with bipolar disorder have abused alcohol or drugs at some point in their lives. Depressants such as alcohol or pain pills can send a person with mania straight into depression, while stimulants like cocaine can have the opposite effect.

Skimping on shut-eye: Little need for sleep is another red flag that a person may be having a manic episode.

The Relationship Clinic is offering free counseling to tornado victims. Call for an appointment.
Posted by Don G. Brock at 12:00 PM No comments:

Thank you so very much.
Posted by Don G. Brock at 8:28 PM No comments: