Children with divorced parents are at an increased risk of suicidal thoughts, with boys especially vulnerable to the effects of marital breakups.
These new findings were revealed by the recent study, “Suicidal Ideation Among Individuals Whose Parents Have Divorced,” conducted by Esme Fuller-Thompson, a professor at the University of Toronto.
Using a sample of 6,647 adults, 695 of whose parents had divorced before they were 18, Fuller-Thompson found that men from divorced households were three times as likely to have seriously considered suicide, while women had an 83 percent higher chance of having done the same.
Even when Fuller-Thomson adjusted for additional factors like parental abuse and addiction, which often accompany divorce, men still had twice the likelihood of having had suicidal thoughts. These findings suggest that divorce can have seriously adverse effects on children. We asked Esme Fuller-Thompson to help illuminate her study and its implications.
What was the most surprising finding of the study?
“We’re certainly not the first [group] to find a link between parental divorce and suicidal ideation. We were looking at gender differentiation – whether adult sons and adult daughters have different [responses]. Both men and women are at increased risk of suicidal ideation – at some time in their life they’ve seriously considered suicide. When you look at it carefully, and we had a big sample, what we found was that the association between parental divorce and suicidal ideation disappeared when I took out women who had also experienced parental addictions and abuse. But for men, the relationship still existed. Men who had experienced a parental divorce that had not been exposed to those other childhood factors still were at greater risk for suicidal ideation.”
Why might boys be more affected than girls?
“Probably loss of the male role model, the father figure. The majority of children of divorce are raised by their moms. There are a portion of children who have very limited contact with their dad. The loss of a male role model is very significant for young men who are developing their gender identities. When you look back at the general literature, that seemed to be the one that popped up, but we don't know for sure.”
Are there some differences between men and women generally in terms of suicidal thoughts?
“Women have higher rates of suicidal ideation, while men are more likely to complete suicide. They tend to take steps such as shooting or hanging themselves. Women will attempt, but with drugs where you can catch them if you get it in time. In the general population, whose parents haven't divorced, among males 5.5 percent had seriously considered suicide, among females 8.7 percent. But when I looked at men who've experienced parental divorce, I had 17.5 percent. For females it went to 17.5 percent too, but compared to norms, women had a higher baseline to start with.”
What’s the link between having divorced parents and exposure to other negative factors?
“Basically, parental divorces are higher if there’s an addicted parent, and childhood physical abuse is higher in blended families. The majority of children of divorce don’t become suicidal, or are exposed to these stresses, though they have a higher chance of exposure.”
What were some limitations of your study?
“We don’t have all the intense details I would like to have. Though the parents had to divorce before the kid was 18, though one would expect the timing of the divorce would affect their experience – we didn’t have access to that information, or things like, how much contact the child had with the father afterward, or when exactly the suicidal thoughts occurred.”
What can divorced parents take from this?
“I don’t want everyone to panic, every divorced mom to go into an apoplectic fit! The vast majority of divorced children have never been suicidal. It’s just one factor among many. You want it to be replicated many times before you really know what’s going on. It seems to indicate that health professionals should use this as one more screening tool, particularly among men, particularly if they’re depressed. We need to think a little more creatively about how to build resilience in children as they’re experiencing parental divorce.”
[from The Huffington Post, by Amy Lee]
Posted by Don G. Brock at 12:58 PM No comments:

8 Ways To Manage Your Stress 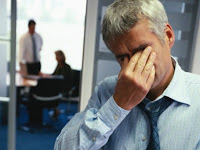 Life is full of stressors at home and on our jobs. Follow these simple tips, such as eating healthier and exercising, to reduce the stress in your life.
1. General Health - Practicing good basic health habits provides you with the energy you need to cope with stress, like: eating regular, nutritious meals, and limiting your intake of foods high in sugar and caffeine, since these can aggravate stress.
2. Good Nutrition - In addition to good nutrition, getting seven to nine hours of sleep every night will help your overall health.
3. Regular Exercise - Regular exercise is another important health habit -- walking, jogging, bicycling, aerobics. Any sport can help relieve muscle tension and release pent-up energy. In addition, exercise can make you feel good. It can help you think more clearly, and feel better about yourself.
4. Group Support - Another way to cope with stress is to develop a network of caring friends and relatives who will listen to problems, provide companionship, and simply be there when you need them.
5. Seek Professional Help if Needed - For major life changes or crises, professional help may be advisable. Call the Relationship Clinic for an appointment today.
6. Learn To Manage Stress In Healthy Ways - In our day-to-day lives, too often we become stressed-out by a world that heaps change on us. That’s why learning to manage stress in healthy ways is one of the most important things we can do to achieve a healthier, productive and rewarding life.
7. Make Time For Yourself - Making time for yourself for things you enjoy and find relaxing is as important as scheduling your time at work.
8. Take A Break From Everyday Routines - Time spent away from your everyday routine with family, friends, or even by yourself can help change your perspective on things.
[from Beliefnet]
Posted by Don G. Brock at 11:34 PM No comments:

While prayer has been practiced for millennia, a new study looks at the way individuals believe prayer can comfort during hard times.
The 75 percent of Americans who pray on a weekly basis do so to manage a range of negative situations and emotions — illness, sadness, trauma and anger.
However, the mechanism by which relief is accomplished has gone unconsidered by researchers.
Through the course of in-depth interviews with dozens of victims of violent relationships with intimate partners, Shane Sharp, a University of Wisconsin graduate student, gathered an array of ways prayer helped them deal with their situation and emotions through coping mechanisms such as venting.
Sharp’s interviewees represented a wide swath of the United States in geographic, educational and racial terms, and came largely from Christian backgrounds.
Those who were boiling with anger said they found “a readily available listening ear,” said Sharp, who explores how prayer helps manage emotional pain in the current issue of the journal Social Psychology Quarterly.
“If they vented their anger to that abusive partner, the result was likely to be more violence,” Sharp says. “But they could be angry at God while praying without fear of reprisal.”
During any interpersonal interaction, the participants are considering how they look through the other’s eyes. In the case of people who pray, they are considering God’s view.
“During prayer, victims came to see themselves as they believed God saw them. Since these perceptions were mostly positive, it helped raise their sense of self-worth that counteracted their abusers’ hurtful words,” Sharp said.
Prayer is also a handy distraction for some, Sharp’s study found. Simply folding hands and concentrating on what to say is a reprieve from the anxiety of an abusive relationship. The experience isn’t that much different from a conversation with a close friend or a parent, he said.
“I looked at the act of praying, of speaking to God, as the same as a legitimate social interaction,” Sharp said. “Instead of a concrete interaction you would have face-to-face with another person, prayer is with an imagined other.”
That’s not to diminish God’s role by considering him an imagined participant in a prayer, Sharp added.
“On the contrary, I wouldn’t expect prayer to have these benefits for people if they thought God wasn’t real,” he says. “The important point is that they believe God is real, and that has consequences for them emotionally and for their behavior.”
Yet, the consequences of prayer aren’t always positive.
“For some, through prayer they told me they learned to forgive their abusive partners, to let go of their anger and resentment,” Sharp said. “But that’s a double-edged sword. It’s good for those who are out of that violent relationship to let go of it to a certain extent. But if they’re still in their violent relationship, it may postpone their decision to leave, and that can be bad.”
That double-edged sword makes the mechanics of prayer an important topic for new research, according to Sharp. “Religion is often pointed to as a mostly positive or mostly negative thing,” he said. “It’s way more complicated than that.”
Many of those interviewed by Sharp said they believe in God, but don’t belong to a specific church.
“They still pray,” he says. “It’s the most common religious practice you can find. For that reason alone it deserves more attention, and I think future research should consider prayer as an interaction instead of a one-sided act.”
[Source: University of Wisconsin-Madison - By Rick Nauert PhD Senior News Editor - Reviewed by John M. Grohol, Psy.D. on December 15, 2010]
Posted by Don G. Brock at 11:50 PM No comments:

There are many depression medications on the market. Here is a link, where you can read more about the different types. For many people, finding the right medication can be a complicated process. It usually requires trying several different medications or dosages to find what works best. It is a process that requires patience.
I would suggest further discussing this matter with your physician. If you are seeing a primary care physician, you may want to consider a psychiatrist instead (or in addition to). Primary care physicians commonly prescribe antidepressant medication to their patients but they are general practitioners. Mental health is not their specialty. Psychiatrists specialize in prescribing medication for psychiatric conditions. This is their area of expertise. Their specialized knowledge would be advantageous to you and may expedite the process of finding the right medication.
Medication does not always solve the issues. Medication will mask the symptoms, but only therapy will solve the cause.
Posted by Don G. Brock at 7:05 PM No comments: